Arturo C. Gonzalez has a favorite saying: “Life is very simple. Thinking good and doing good.” He has been at it for a long time. The man is 104 years young (as he refers to his age) and he exudes wisdom. 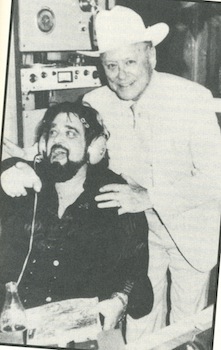 I first met Mr. Gonzalez ten years ago while I was researching an article on the 1952 minor league baseball season in my hometown of Decatur, Illinois. 1952 was not just any baseball season. Decatur had had a baseball team since the beginnings of the sport in the Civil War era. In 1952, the people of Decatur realized that their beloved Commodores team was integrated – just like that. Players of color occupied the entire infield, one outfield position and included the star pitcher. The town had been seeking a new owner to keep the franchise going. Arturo Gonzalez was an attorney in Del Rio, Texas with a love of the game and some experience in owning minor league franchises. It was down to the wire before the deal was signed – just in time for Gonzalez to pull together a squad. Everyone in Decatur was elated to have found not just a new owner, but also one who knew the business of the game. The city fathers, no doubt, checked out the financial position of Mr. Gonzalez. They did not realize he was a man with a mission – changing the social fabric of America. Baseball is so American that baseball is interwoven with the social fabric of the nation. Of course, no one had to explain this to Arturo Gonzalez.

I was delighted to discover Mr. Gonzalez was still alive. So many of the players and coaches of the 1952 Decatur Commodores had passed on. I came to know some amazing individuals like Mr. Gonzalez and Negro League star Jimmie Freeman in the process of researching and writing my story. The Illinois State Historical Society published ONE GLORIOUS SEASON: How Baseball Helped to Integrate Decatur, Illinois in its well-respected journal in 2003. You can read the article in its entirety on my author website www.freedomhistory.com. American sports history is about far more than sports. It is about the evolution of the social fabric of American. Central to that story is the history or race relations.

There was far more to Arturo Gonzalez than baseball. Recently, he and I began a dialogue on his relationship with the legendary rock and roll DJ Wolfman Jack. Yes, the same Arturo Gonzalez.

Del Rio, Texas is situated on the United States/Mexico border. Just across the line is Ciudad Acuña, Mexico. US troops were deployed in the area from 1900 to 1919 during the Mexican Revolution and General Blackjack Pershing’s expedition into Mexico to pursue Pancho Villa in 1916-1917. Del Rio also has been the home of Laughlin Air Force Base since 1942. U-2 spy planes once flew out of Laughlin. Their recon photos of Soviet missiles in Cuba led to the famous Cuban Missile Crisis in October 1962. Despite this colorful history, some might argue that Del Rio’s biggest claim to fame is Wolfman Jack.

Long before his national popularity as a DJ in the 1960s and his movie role, playing himself, in the classic movie American Graffiti, Wolfman Jack was simply Bob Smith. He was a young man from Brooklyn struggling to build a career in radio broadcasting – chasing his dream. Smith worked as a daytime DJ at a small station in Shreveport, Louisiana in 1962. That is where Arturo C. Gonzalez comes into the story.

The first radio stations appeared in the 1920s. In the early days of radio, the United States and Canada divided up all of the long-range high frequencies between themselves, leaving none for Mexico. The US government limited the power of radio transmissions through its licensing. An infuriated Mexico accommodated so-called border radio stations by allowing operators to transmit with power far in excess of the maximum power of 50 kilowatts allowed in the US.

XERF-AM in Del Rio, Texas and in Ciudad Acuña, Mexico came into existence in the 1920s. XERF was one of a number of border blaster stations just across the river in Mexico. The station closed down in 1939. In 1947, Arturo C. Gonzalez and a partner resurrected XERF-AM with a new 250-kilowatt transmitter located in Ciudad Acuña. The clear channel signal on AM 1750 (on the far end of the dial) could be heard nightly across the United States and Canada and beyond into Europe and Asia. In fact, later findings revealed that the overseas audiences for XERF even included the KGB in the Soviet Union. Ironically, while the US government was not happy with the border blaster stations and worked to force the Mexican government to put them out of business, the US was using the same approach to broadcast through the Iron Curtain to the people under Soviet rule. So while the Soviet people listened to the carefully selected programming of ultra-conservatives in the US government through Voice of America, KGB agents experienced the leading-edge music of XERF!

Paul Kallinger moved to Del Rio and went online on XERF in 1948. He played country music – then known as hillbilly music – and bluegrass. Legendary musicians like Johnny Cash, Tex Ritter, Ernest Tubb, Porter Waggoner, the Carter Family and Eddie Arnold performed live on the station with Kallinger. Up-and- coming musician Elvis Presley called to inquire about being on the station in 1954. Kallinger told Elvis that they did not do rock-and-roll music.

Kallinger was both a DJ and a pitchman. In 1959, Gonzalez and his partners formed Inter-American Radio Advertising, officing in Del Rio. They did not sell airtime to advertisers. Instead, they split revenues when the orders for products advertised online came in. They sold nearly anything you could imagine … and then some.

Bob Smith worked as a daytime disc jockey at KCIJ-AM in Shreveport, Louisiana. Larry Brandon, who owned another AM station in Shreveport, lost his station. He approached Gonzalez in Del Rio and bought up XERF’s late night hours. Smith, while retaining his day job at KCIJ, began moonlighting for Brandon, recording radio shows. The personality, which Smith developed at this time, was the beginnings of white-guy Smith’s transformation to the howling, very ethnic Wolfman Jack persona. Brandon mailed pre-recorded radio programs from Shreveport to Del Rio and Gonzalez played the tapes. Ultimately, Smith and Brandon had a falling out. Smith traveled to Del Rio to see Gonzalez.

Arturo Gonzalez was not just an entrepreneur; he had an eye for talent … and beyond baseball. He brought the Wolfman to Del Rio. From that point on, Smith traveled nightly to Ciudad Acuña and became Wolfman Jack from 9 p.m. to 10 p.m. The howling Wolfman played anything he wanted to play and that included the hottest music of the day – “forbidden” race music not allowed on the Top 40, like doo-wop, blues, R&B, zydeco and jazz. From 1962 to 1964, Wolfman Jack broadcast his nightly show out of Ciudad Acuña, Mexico. The Wolfman’s distinctive voice, his energy and on-the-air antics and the racy music he played made him nationally known to young Americans all across the nation.

In 1964, there was a shootout (or was it two?) near the transmitter in Ciudad Acuña, Mexico while Wolfman Jack was doing his nightly show. Violence south of the border is not a recent phenomenon. Wolfman Jack moved to a safer border station in Tijuana, Mexico, just south of San Diego. Tijuana safer? It is all relative.

It was from Tijuana that Wolfman Jack became the mainstay of all the cruisin’ guys and chicks in the Valley of California, including young George Lucas in Modesto. When the budding film director made his second film in 1972, Lucas approached Wolfman Jack to play himself. The wonderful 1960s coming-of-age film, American Graffiti, released in 1973, was a colossal success – one of the most profitable films of all time. Wolfman Jack’s reputation soared and he became an icon of the 1960s era. He also did well financially. Lucas gave Wolfman a fraction of a point and the resulting income allowed him to live comfortably until his death by heart attack in 1995 (He was only 56).

Because of George Lucas’ American Graffiti, people tend to associate Wolfman Jack with the Valley in California.

“Hey, baby, when you love you live!” “Come on down and party with the Wolfman!”

Steve Chicoine is the author of many books, including the young adult novel BUZZ, a coming-of-age story set along the Texas-Mexico border. The book is available through Amazon. The author’s website is www.freedomhistory.com.