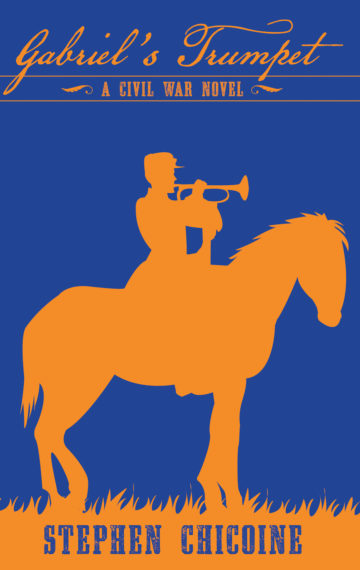 $7.99Buy Book
I recently read Gabriel’s Trumpet and thoroughly enjoyed it. I then shared it with my high school grandson, a Civil War enthusiast, and he really liked it, too.
Bob Tvrdik
May 2018

Review of Gabriel’s Trumpet by Martha Boltz for the Washington Times Communities http://communities.washingtontimes.com/neighborhood/civil-war/2013/may/29/ 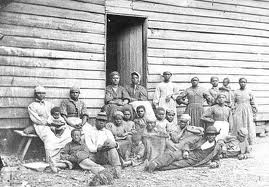 Every once in awhile a new Civil War book of fiction comes along that seems to resonate with today’s reading public while retaining the color and depth of the past about which it is written. Such is the case with “Gabriel’s Trumpet,” by author Stephen Chicoine, who has written several non-fiction books as well. Though apparently directed at the middle school/high school age reader, there is absolutely nothing in this well-written book not to please the average adult casual reader with a Civil War interest. It is centered around two young Union recruits, for whom the war thus far consists of marching from Chicago into the South, eating non-palatable meals and with little activity to get their blood properly boiling. Timothy O’Connor and Patrick Hanrahan vacillate from blaming each other as to whose idea “this war stuff” was, to looking forward to a good bloody fight with the Rebels. One is more feisty than the other, but their friendship is undeniable as they annoy a corporal and capture a semi-wild pig to roast, calling it “a Tennessee slow bear” to get around the rules against foraging in the enemy’s territory.

Slavery has only been a vague concept to the two until the time comes that they actually meet real slaves. They are struck by the normalcy of the black men and are sympathetic to their plight as well as their treatment. New feelings arise in the souls of each one, until they realize that being friendly to an individual slave brings wrath down upon them from the putative owners. Their activities vary from complete boredom to the excitement of hearing cavalry troops coming, as they alternately look for a battle to fight to being grateful that one has not found them.

Hanrahan carries a gold watch, which he took from someone he had killed prior to the war, and considers it his talisman. At times it almost gets him killed, but he clings to it. An interesting exchange with other Union troops occurs when the latter state they are not fighting to protect or free the slaves, but just because they want to save the Union. The story is unique for its genre because it proceeds along its way without having an apparent agenda, refreshing to say the least.

An interesting but little used subject matter is the infusion of old time gospel or slave songs, accurate in all respects, as spare time around the cabins frequently was spent in singing black hymns. Some of these have been heard for years, but some are old-time ones rarely seen or heard today in literature and are a welcome addition. Songs like “Follow the Drinking Gourd” and “Blow, Gabriel, Blow” plus “God’s Gonna Trouble de Water” are priceless and should never be forgotten.

The author brings to his subject matter a fresh approach that is beneficial to the youth of today who manage to graduate from high school with no more than a 15 minute talk about the Civil War, War Between the States, or whatever name you wish to use. While this is obviously written from a slightly Union perspective, there is little in it to upset the most rabid Rebel.

High schoolers are at an age that they are fairly knowledgeable about the subject of slavery but are woefully un-knowledgeable about the Civil War as a whole, and this story of two Yankee boys not that far from their own age should arouse a deeper interest in what the young lads of that era went through and how they did or did not accept the situations in which they found themselves. A good read for all.

Review by Martha Boltz for the Washington Times.

1862. While the main forces clash to the west at Shiloh in a colossal battle, a small Union force moves southward into northern Alabama. They are overextended and soon in desperate need of reinforcements. Local partisans bushwhack remote sentry postings nightly. Frustration builds over the loss of life. Rumors abound of the presence of Rebel cavalry moving into the region in the aftermath of Shiloh. GABRIEL’S TRUMPET is the story of Patrick and Timothy, two young soldiers who find themselves in the middle of the action in a brutal fight that has no front line. The nightmarish landscape of war displaces any notions the two have of glory as they struggle to make sense of the violence and somehow survive. Patrick and Timothy and their comrades-in-arms come face-to-face with the grim reality of slavery and what is really at stake in the Civil War. Their encounters with slaves and slave hunters and with planters and partisans gradually transform them and eventually push them to the edge in a gripping climax.

The issue of slavery ignited the War Between the States. However, President Lincoln went to war to restore the Union, not to free the slaves. Consequently, the policy of the war in the first year was to not antagonize the Southern planters. In time, as they lost comrades to bushwackers, the federal soldiers in the field began to blatantly disregard orders to this effect. Nothing had prepared the volunteers for the experience of losing a comrade. Nor did they have any sense of the abomination of slavery until they marched into the South. GABRIEL’S TRUMPET conveys the personal experience of the soldiers in the field during the time leading up to Lincoln’s Emancipation Proclamation and the transformation of the war into a crusade.

Gabriel’s Trumpet is an enjoyable novel based in the Civil War era, focusing on two men from Irish descent who fought for more than just preserving the Union.  The story reveals many themes. One theme is shown in the interaction the soldiers have with slaves on a plantation during a night watch.  Night riders are harassing and killing the Union pickets, but the soldiers are under order not to shoot civilians.  Even when something happens that uncovers the leader of one group of night riders, no one is allowed to take retribution for the lives lost because of these men.

The love of God and belief in prayer shown to the soldiers one night by slaves on a plantation and the main character comes to view the war from a totally different perspective.  Some think fighting is all about getting the glory and medals, while others think that freedom from bondage is the reason for the fighting.  More than physical freedom, the slaves view freedom with spiritual eyes, knowing that death brings freedom from the chains, especially if they are believers in the Lord.

I have read many novels set in Civil War time, most of them I haveenjoyed, including this one. This one is not based on a certain battle or side, but more on the bigger picture that Abraham Lincoln hoped others believed in. I found it interesting in the historical epilogue the words, which Lincoln gave after being elected for a second term.  There isn’t a lot more that I can share about the novel without ruining the suspense. Take an opportunity to read it yourself. The author tells a very gripping story with words that help form a picture in the mind of the reader throughout the story.  History is important to learn and re-learn as it gives us all pause to reflect on where we have been and where we can go.  Sometimes when reading an historical event or speech, we see that what we thought was a new idea or problem really isn’t; it has been around for a while.  Treating each other with the love of God is paramount because we all bear His image.  The love the two men share as friends really goes deeper than that, but you will have to read Gabriel’s Trumpet to unearth all the wonders it unfolds. 5-stars

***************
Review by Glenn Davis, Middle School Social Studies Teacher and
historical researcher of the 18th Ohio Volunteer Infantry and webmaster http://www.18thovi.com
Set against the historical events of 1862 in Northern Alabama, Gabriel’s Trumpet
by Duane Gordon chronicles the culture shock of two young men from the 19th Illinois
Volunteer Infantry. Young Privates Patrick Hanrahan and Timothy O’Connor experience
slavery, prejudice, and violence. Straight from the Irish ghettos of Chicago, they are
plunged into a nightmarish world of slaves and plantation owners. This book highlights
the hypocrisy of General Don Carlos Buell’s potato patch policy whereby the Union
army tried to appease the southern aristocracy. I heartily recommend this book to young
readers interested in learning more about the fight to free the slaves … I think the book
should be offered to Scholastic Book Club or Trumpet as a young reader selection. I can
see where the book could be used as a tool in the classroom talking about the institution
of slavery. 5 stars