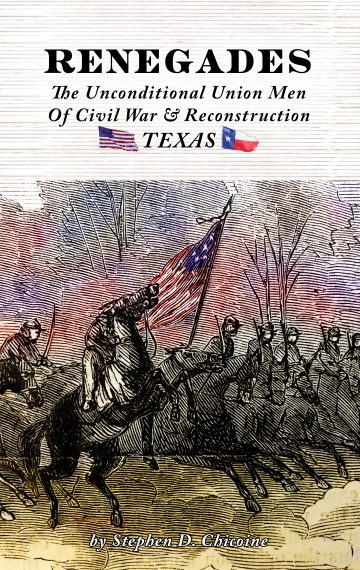 A decade-long project, nearly completed. Will be published in late 2020 or early 2021.

They included former governors, judges and Texas Rangers. Many were rugged individuals from the Texas frontier — crack shots and expert horsemen. Most had no use for slaves and little regard for slavers. Above all was their loyalty to their nation. They risked everything in the face of intimidation and violence. Some died by hanging or were shot down in cold blood. Others escaped to Mexico, made their way to New Orleans and enlisted in the First Texas Union Cavalry, whose relics the State later discarded and whose history it disregarded. RENEGADES weaves the powerful stories of the real Texas rebels, the men who steadfastly remained loyal to the Union and refused to commit treason. With the war’s end, these Union men returned home, refused to pursue retribution, suffered at the hands of murderers during Reconstruction and helped to rebuild Texas and lay the foundation for its future. White and black alike, they heroically strove for the restoration of the state post-war, including the protection of the lives and rights of the freedmen.